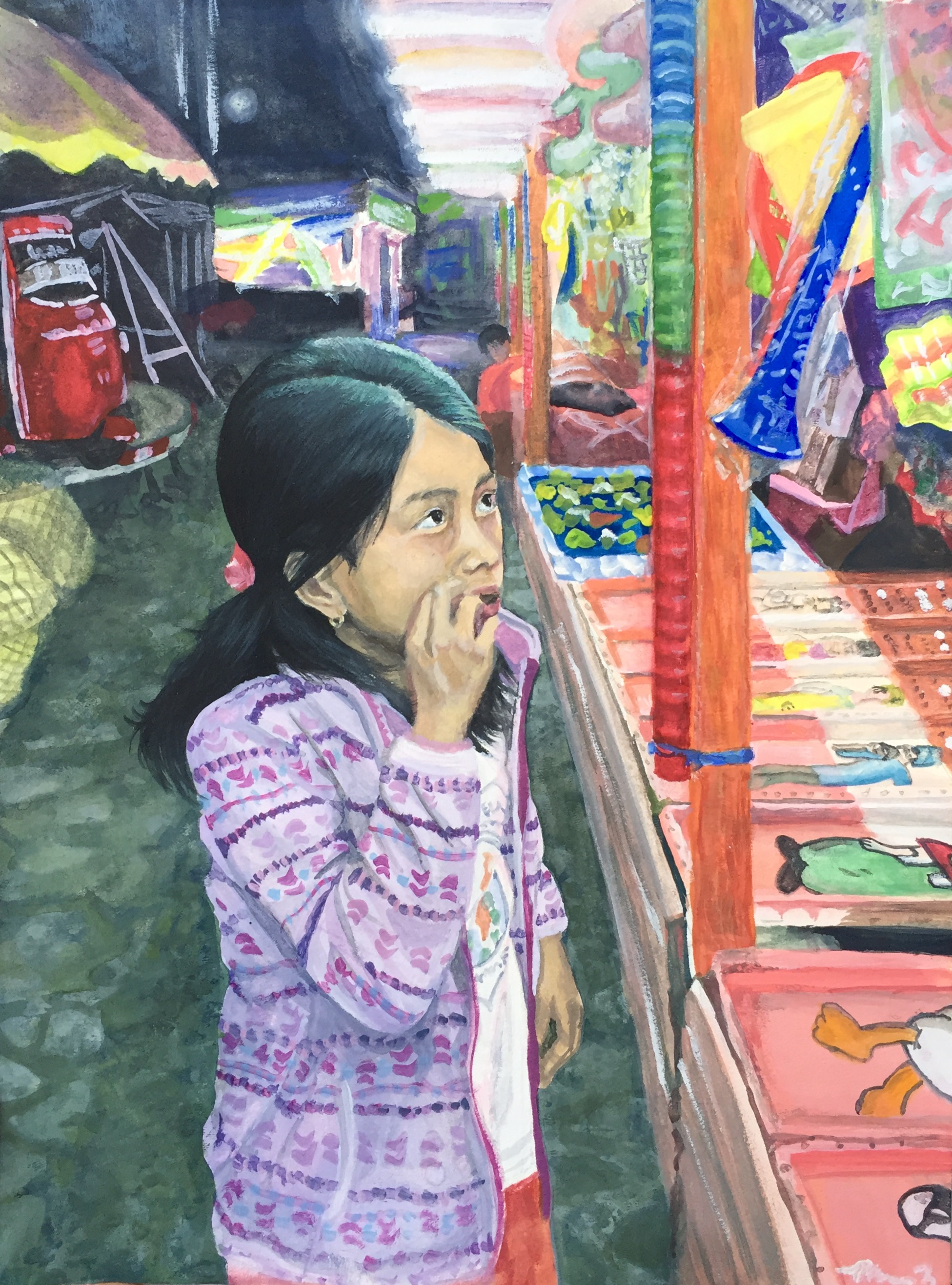 My day starts at 7:00am. I eat breakfast with the other students who are staying with the family as well as my host dad, Angel. Lucki usually gets back from walking Alondra to school while we’re eating. Several different students have come and gone in the house since I’ve arrived, but Rebecca, a girl from Brooklyn who came a day after I did, is still here with me from the beginning. Her family is Puerto Rican but didn’t teach her Spanish, so now she’s learning it to become closer to them and her roots. Like me, she’s aiming to be fluent and is staying for about two months. Breakfast is different everyday. Sometimes it’s western food like pancakes or French toast, and other times it’s Guatemalan food like beans, eggs with tomato, and fried plantains (my favorite). No matter the meal, there is always a basket of tortillas and a small bottle of green hot sauce called Picamas on the table.

After breakfast, I walk to school, passing the market and Catholic Church and weaving through tuktuks, motorcycles, bikes, cars, trucks, stray dogs, and people carrying heavy loads on their heads. The school’s name is Jabel Tinamit. Mayan owned, it employs indigenous locals (and mainly women) as Spanish teachers and runs social projects in the community as well, offering scholarships and tutoring to older local students and running education programs for kids in more rural pueblos surrounding Panajachel. At Jabel, I study for five hours per day with my teacher Aracely. She also recently graduated secondary school, and I am constantly surprised by how similar yet completely different our lives are. When we talk about music, our friends, or how High School Musical and Camp Rock were the highlight of our childhoods, I easily forget that she grew up much less privileged than I, without books in classrooms, working since primary school, with an alcoholic, Civil War vet father who abandoned her family, and with a mother who had a childhood even harder that hers and suffers several mental illnesses from the emotional stress her husband caused.

The pain Aracely and her family have gone through is unfathomable yet, according to her, is common and far from the worst of what many, especially indigenous families, suffer here. Despite her situation, she’s worked to get scholarships thus a better education. We share a lot of the same opinions, including about the importance of critical thinking, which isn’t fostered in the public education system. (Many of her classmates seriously struggled when tasked with giving their personal opinion on an issue in the graduation exam.) In response to her frustrations, Aracely hopes one day start a library in her pueblo and a Spanish/English school for underprivileged kids that not only teaches critical thinking but also the history that resulted in the Guatemalan people’s struggles today (also not something learnt from public school).

Almost all my knowledge of the culture and issues in Guatemala comes from her, as she is passionate about both. She speaks Quiche, one of the 21 Mayan languages, but was barely even aware of her culture’s existence before moving out of Guatemala City to her current pueblo as a kid, taking it upon herself to learn Quiche from her grandmother a few years later. Initially though, she was ashamed of being indigenous, as her culture’s languages, dress, beliefs, and people themselves are disrespected, seen as simple, subservient, and inferior by society. Of course discrimination has lessened since the Civil War peace accords, and the laws fought for by the guerillas preach equality, but society’s message to indigenous people remains hardly subliminal.

Freedom of expression is just a phrase on paper when school uniforms and professional attire are western clothes, associated with the whiter, mestizo culture; freedom of speech doesn’t go far when you only speak Kaqchikel but your government, hospitals, and every other inch of the “establishment” only runs in Spanish. In TV shows, ads, and even beauty pageant winners, one rarely ever sees indigenous people or culture. Mind you, we are talking about half of the country here.

The prejudice can be felt on an individual level in everyday life. Aracely remembers being made fun of for wearing traditional clothing in high school. She had a friend who, though is indigenous, can pass as mestizo and refuses to recognize her culture, even hanging out with girls who talk poorly about indigenous people in front of her. And all this sounded familiar to me as an American. There isn’t a single living person that isn’t affected by the racial and cultural hierarchy created by the greed of imperialism. Whether it’s the struggles of Guatemala’s indigenous people or the murders of young black and brown men by U.S. law enforcement, systemic discrimination can be found everywhere and everywhere it is connected, tracing back to the same roots.

My class ends at 1:00pm. I walk home for lunch usually pretty exhausted from heavy grammar and heavy topics. Sometimes my host parents make limonada or Jamaica (hibiscus) drink too which is delicious. In the afternoons there are always activities offered by the school like a movie about Guatemalan history, a bike ride to a nearby pueblo, or cooking classes. Most recently I participated in a hike to a sacred cave where Mayan ceremonies are performed. I also often paint, read, or do homework in the afternoons. For dinner, the whole family and all the students eat together. Two new foods I’ve grown to love here and first tried with my family are chuchitos and tamales. After dinner we all usually talk a bit at the table before watching TV or finishing homework, then going to bed.