Editor’s Note:H??ng Uyên Bùi is a Vietnamese student who applied for, and won, the TAP grant in her second language. I’ve chosen not to edit her work in English because, while her grammar and usage might not be fully standard, she communicates her message, and her heart, fluently. One of the things travel teaches is to reach across boundaries and learn to express ourselves boldly, and learn to listen from the heart. It doesn’t seem right to edit that. Enjoy Uyên in her own words.

We come to visit Uncle Bob, the founder of One Maker Group, a maker space which has three spaces in Singapore, it’s the place making the idea into real product. Basically, maker space is the space to make, the place to design and do. Uncle Bob told us the story of the concept Maker Space that was appeared in the economic crisis of United States in 2008, when the houses were taken by the bank, the only things that remained were instruments but they did not have any space to keep. Some people said they would lend space to store them, so they lost their jobs but had a pile of instruments and they started to become more creative. They worked in those space, thought and made many strange new things – pastime is the fertile soil for creativity and renovating, for example, 3D printer is also the product of Maker space like this.

In Uncle Bob’s space, we saw many 3D printers, recycling things, … all of them are used to make something you come up with… He said, “The only thing that you need is the idea, if you do not know how to make them, come here, we can guide you from drawing, designing, to the knowledge of technical”. To use this space you have to pay $5/ hour or $20/hour with the instructor, But in his opinion, “if you do not have money, you will have time and in turn, so in case you want to use this space but do not have money, you can work for the space to exchange”. He even suggested us to do apprenticeship to learn to run the space as well as knowledge from design to creativity, technical, technology, while several days course costs to 1000 USD. In my opinion, that is sharing economy, you give the others what you are abundant and in turn you will receive some valuable things. 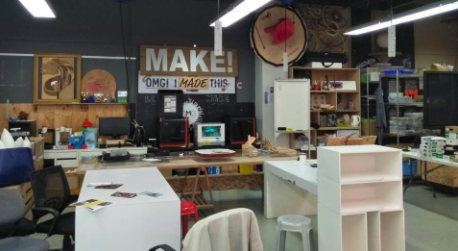 We were guided to the whole space and introduced about each of the product, they can be the dinosaur made by a father wanting to teach his daughter to save money but forget to make some exit to take the money out, the simple but really modern automatic watering system which do not require any complex technology of a 72 years old retired man, a fish tank that can have plants growing above thanks to its humus and water. How surprising the creativity and imagination of human, from 8 year-old kid to 72 year-old man! So there is no excuse for young people like us not train our creativity!

It seems really necessary to have such a wonderful space like this, he told us let build that, no need to be big, no need to have expensive 3D printer, just do it. The spirit of just doing, not afraid of making mistakes, making failed things…as the things there are rarely perfect from the first time, they have to be repaired again and again Uncle Bob even kept the failed things because he know that learning from others’ failure is also really important… “just do it, do not think too much about whether it is successful or not”… “All the thing you need is an idea”

Just a morning but many awesome lesson!!!

Leaving One Maker Group, we have lunch in ChinaTown and prepare for meeting with Uncle Vu Minh Khuong, the Vietnamese government adviser in Lee Kuan Yew School of Public Policy of National University of Singapore, We come around Botanic Garden with the area of 74 hetares before coming to the meeting. How considerable the diversity of flora there is. If I do not come there I will never think there is such a large botanic garden in the center of a modern city like that. 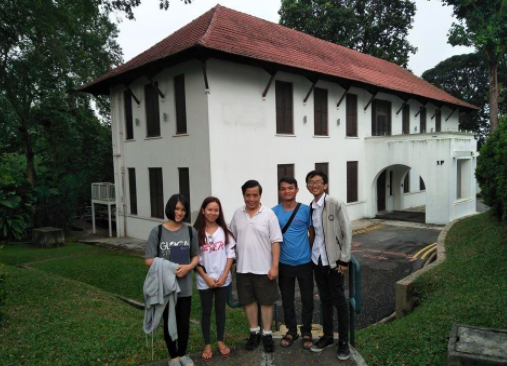 Coming back to the meeting, Mr. Khuong is the university lecturer of NUS, he led us to meet him in his private room in the university, the meeting last three hours… now we could not remember clearly what we had talked together, the only thing remaining in my mind is the motivation, inspiration he has given to us, to continue to walk in the path we have chosen. He showed his support and appreciation our enthusiasm, our dare to fail spirit….

Such a field trip day with many meaningful things in Singapore….